A vote was taken regarding the Towing Ordinance for Matawan at this meeting. For whatever reason, Council voted to continue to limit the towing contract to a 2 mile radius. This limits the opportunity for Matawan to get any realistic competitive pricing on its towing contract. Why? The "good ole boy" system seems to be alive and thriving in Matawan. Why do our Council members feel it is a personal attack on other Council Members to consider other quotes from nearby towing companies? This should not be personal but should be what is "cost effective" to the Borough. The only dissenting vote was Councilman Fitzsimmons, Chairperson of Finance. Kudos to Fitzsimmons for standing his ground.
Posted by matawan advocate at 1:28 PM 7 comments:

Don't you just love Summer. Council meetings are brief and with little bantering. This Council meeting was quick and simple. No major issues. However, the Bill List was not published. This is of great concern to us. We believe the Bill List should be published along with the Agenda items for each meeting. Why make it difficult to become aware of what bills are being paid in the Borough?

Of course, there has been no decision on the Ordinance which would prohibit elected officials from performing work for the Borough.

Ethics Where Have You Gone?

Apparently, ethics in Matawan have gone the way of the economy....in the DUMPER! This is not to say all the members of the Matawan Borough Council are in the same boat. Here are the facts...

Not bad for a Councilman who said back in March 2008, he would stop doing work for the Borough even though it would hurt his pocketbook.

Who's kidding who Councilmen?
Posted by matawan advocate at 12:20 PM 8 comments: 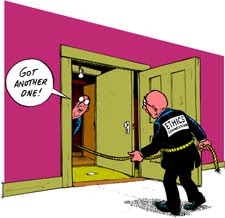 Last night's Borough Council meeting was somewhat routine.
Mayor Buccellato announced a generous donation of $1,000. to the July 4th Fireworks Fund, given by Matawan residents, Jim & Donna Tumbutly, (pls forgive if misspelled.) Matawan's Fire Department also collected $108. made by visitors in the donation pail. Kudos to these fine residents and the Fire Dept for their efforts. The Fireworks were glorious!

So now you are wondering what bomb could the Mayor have dropped last night. Do you all recall an Ordinance mentioned several months ago, prohibiting elected officials in the Borough from performing work for the Borough? It had been an item Councilman Joseph "Bud" Mullaney was calling for back in March 2008. Under the guise of bringing "good clean government" to Matawan. HA! At that time we applauded Councilman Mullaney for his efforts. Short lived, perhaps. No, short lived, definitely! Several months ago this Ordinance was on the Agenda, then mysteriously was taken off. Without explanation from the Mayor and Council this was done several times. Now this became a pet peeve of ours. After all, who doesn't want Matawan to have "good clean government." It appears that Councilman Mullaney had a change of heart and hired an attorney to stop this Ordinance from coming before the Council for a vote. The implication was a lawsuit would be brought against Matawan. All this from a Councilman who back in March of 2008, was citing Holmdel's Ordinance and was going to look to surrounding towns for guidance.

Mayor Buccellato announced from the dais that he has requested the Attorney General look into this matter on behalf of Matawan to protect the Borough. This has to be a case of "THE GODS MUST BE CRAZY." A Councilman threatening the Borough residents (he was elected to protect and serve) with a possible lawsuit in order for Council members to financially profit from their position.
A resident stepped up to the podium and read from Mullaney's interview back in March 2008 given to a local blogger, The Clamdigger. Quotes were read from Councilman Mullaney which clearly contradict his current position. What could have changed his mind, you ask? Well, gee whiz Goober, whose interest is Councilman Bud Mullaney looking to protect? It is our position it is not Matawans! And this Councilman is running for re-election this November. You be the judge in November!

For the record, the opinions on this Blog are based on documented evidence. You have the right to disagree. However, the printed, published commentary are based on printed, published interviews given by Councilman Joseph "Bud" Mullaney to The Clamdigger in March
2008.
Hope to see you at the next Council meeting.....
Posted by matawan advocate at 8:09 AM 9 comments:

Noteworthy Meetings In Matawan This Week

Tonight the Planning & Zoning Board meets at 201 Broad Street. Meeting Minutes are published on the Borough site up to May 4, 2009. The Agendas and Meeting Minutes seem to have difficulty being published in a timely fashion.
Tuesday night's Borough Council Workshop/Meetings are scheduled to begin at 6:30pm. Waiting for the Borough Council meeting Agenda and Bill List to be published on the website. For some reason the Bill List doesn't always make it on the website. We would like to see the Borough website brought up to date. It can only be as informative as the data it provides to the residents.
Matawan's Historic Sites meets on Wednesday at 7:30pm, Matawan Borough Community Center, 201 Broad St. Many residents showed an interest in Matawan's Historic Sites during the hearings on the Big Blue House on Main St. Come to the Historic Sites meetings to become involved in Matawan's history.
Posted by matawan advocate at 7:11 AM 3 comments:

What a great night for Matawan! Residents and visitors alike were treated to a wonderful fireworks display last night. Kudos to the Matawan Recreation Commission for a fine job of coordinating this event. Recreation Director Joe Altomonte was seen running from one place to another making sure every thing was going well. Great job Joe.

Minor problems that arose with unauthorized vendors were quickly handled. To those who are not aware, vendors must file for a permit at the Borough. Why anyone would cheat the vendors who follow the rules and paid for permits escapes us.

One look at a child's expression last night while the fireworks were going off said it all!
Matawan and July 4th Fireworks, perfect together!
Posted by matawan advocate at 6:46 AM No comments:

COME ONE COME ALL

Posted by matawan advocate at 7:11 AM No comments: