A PICTURE IS WORTH A THOUSAND WORDS 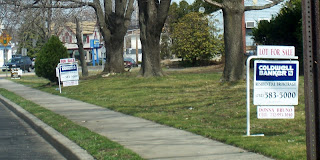 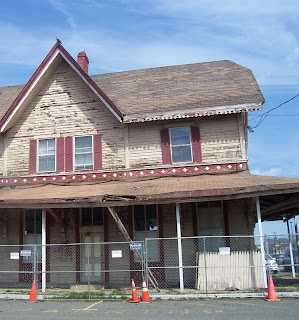 PROGRESS IN MATAWAN...I THINK NOT! 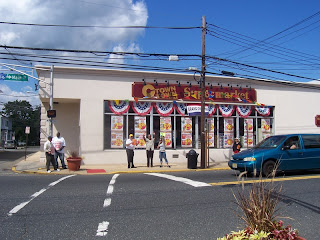 Just a short note on election signs. Does anyone wonder how much these huge signs cost? They ain't CHEAP! It would be appropriate to see future elections with smaller signs and parties using the money for the betterment of Matawan. After all, the election should be about issues not who has the biggest signs and most signs covering our little Borough!
Posted by matawan advocate at 1:38 PM No comments:

Remember the game "Six Degrees of Separation" regarding Kevin Bacon, the Actor. Well, Matawn has its own version of this game as regards, Vic Scudiery, Councilman Mullaney and Matawan. Here we go people, Vic Scudiery owns property on Main Street by the Train Station, Vic Scudiery's nephew, Robert "Bob" Bunyon is running for Council, Robert Bunyon is the same person who was replaced at last year's election by Michael Cannon (you all remember the man who is running, not running and then the man who legally was not entitled to run, Mike Cannon.) Councilman Mullaney endorses the Mayor, Bunyon and Mendes. Now here is where the six degrees of separation come in..Mullaney, Bunyon and Mendes are all on the Planning/Zoning Board, Scudiery owns property on Main Street, Matawan. The Transit Village Redevelopment Area encompasses land owned by Scudiery, Mendes and Mullaney, we all know Mullaney owns Mullaney Tires on Main St and his son, Michael Mullaney has a Physical Therapy office on Main St. There is more American Properties, The Preserve on Route 79 has two huge signs on the Entrance to the property endorsing Aufseeser, Bunyon and Mendes. Now if that doesn't smack of conflict of interest I don't know what does! Messrs. Bunyon, Mendes and Mullaney are all Planning/Zoning Board members. Councilman Mullaney abstained at Council meetings and Planning/Zoning Board meetings from voting due to the fact that he and Mr. Sic of American Properties had some kind of relationship 17 years ago. As it turns out, Ken Cassiday, Chairperson of the Planning/Zoning Board stepped down because he lives close to the American Properties site and Kevin Mendes stepped in as Chairperson when American Properties came before the Board. Now American Properties has signs endorsing Bunyon and Mendes. Is Matawan running Matawan or Vic Scudiery through Councilman Mullaney running Matawan? Think people, the NJ Department of Motor Vehicles moved from Matawan to a Hazlet strip mall owned by Vic Scudiery. Did anyone hear of Mullaney and Company attempt to prevent them from moving? Word has it that C-Town is closing but not until after the election. How much did Mullaney have to do with it staying open until after the election? We all know he had alot to do with bringing this store to Matawan and continues to fight to keep it on Main St. Where were they when it came to the NJ Department of Motor Vehicles? When all the businesses in that area lost business due to Motor Vehicles moving to Hazlet? Where was Mullaney when it came to the Health and Safety issues confronting Matawan at the 7-11 on Main St? I know where Councilman Buccellato and Councilwoman Buragina stand. Buccellato brought forth an idea for a solution to the problems. He along with concerned citizens forced the Health Department to take a stand. These are questions that should be in mind when voting this November.

The way I see it your choices are for people who care about Matawan or people who have their own self interests. Needless to say my vote goes to Paul Buccellato, Debra Buragina and Linda Clifton. These are people who care what happens to Matawan. From what I have observed at Council meetings they are the people who will get the Transit Village Redevelopment up and going.
Posted by matawan advocate at 11:45 AM 8 comments: 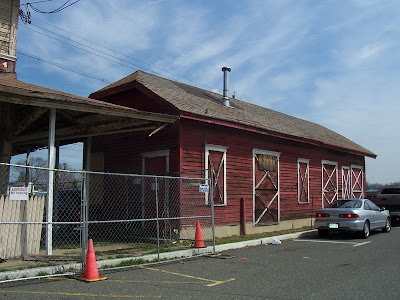 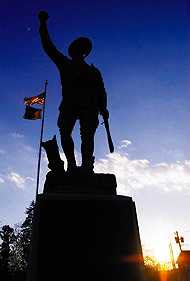 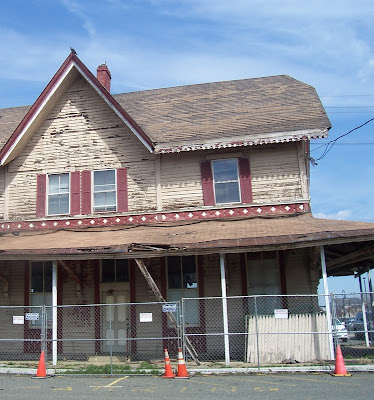 Great editorial in the Independent on October 17, 2007 pertaining to the Beacon Report, paid for by taxpayers and dismissed by Mayor Aufseeser and Councilman Mullaney. As reported in this Blog, the Report disappeared from the mailboxes of Councilpersons excluding Councilman Mullaney. At the last council meeting prior to Election Day, it was brought to light that there were not one but many items that would have helped Matawan with revitalization. The questions is WHY DID MAYOR AUFSEESER AND COUNCILMAN MULLANEY HIDE THIS REPORT FROM THE COUNCIL AND TAXPAYERS? Take a moment and read this unbiased editorial. Note it wasn't reported in the Asbury Park Press, known to be pro Democrats on the Borough level, nor the Courier, a weekly publication, also pro Democrats. Could it be that even they can't justify the actions of these two officials? So much for reporting just the facts!
As election day approaches, it is obvious to anyone who is aware of the goings on the Borough level that Matawan needs and deserves a well educated, experienced Mayor! The candidate that is the right person for the job is Paul Buccellato. Check his record out for yourself. He has experience on the Borough level, both on the Council and Planning/Zoning Board, is a professional Architect, business owner in Red Bank and has previously been working on the Transit Village. Debra Buragina and Linda Clifton are his running mates. Debra comes with the experience of being on Council for 9 years, worked on the Transit Village and was requested by the Mayor, and took over the troubled Recreation Committee when the Recreation Committee's former chairperson and its members could not get along. Linda Clifton is a new candidate who adds a fresh perspective to the Council. Living and working in Matawan she is familiar with the problems we residents are facing. All are for the Transit Village and revitalization. Without which Matawan will be just a small town, with high taxes, no services, a decaying Downtown area and no future. Matawan needs change. We need people who care about Matawan and not their own self interests.
Posted by matawan advocate at 1:03 PM No comments:

"Matty" The Ghost of Matawan Borough

Has anyone seen "Matty The Ghost of Matawan Borough?" Well, apparently in the Halloween spirit a Report regarding parking and streets in Matawan was never given to the Borough Council. Interestingly enough Councilman "Buddy" Mullaney stated he did receive the Report. However, his daughter, Councilwoman Mullaney, Councilwoman Deborah Buragina, Councilman Mike Cannon, Councilman Paul Buccellato did not. This was brought to the attention of the Borough by Councilman Buccellato who informed the Council, including the Mayor, that he may file a complaint with the Attorney General's office, etc. It seems the Report was received by Fred Carr, Borough Administrator, who claims he distributed it to each Councilpersons mail box in the beginning of 2007. That rascal, "Matty The Ghost of Matawan," must be up to his old tricks, he must be the one who took the Reports. Except for Councilman "Buddy" Mullaney's report. My, my, my, I don't know what you people think, but I don't believe good ole "Buddy" received the report either. This would raise the question of why did he say he received it or if he did receive it why didn't he discuss the report with the anyone else on the Council? Councilman Malley was absent so we don't know if he too received the Report. It all stinks, if you ask me. Oh Mullaney may come back and say he was mistaken, he was confused about which report it was, or that "tricky Matty The Ghost" was at it again. I say hogwash!

What is going on people? I truly encourage Councilman Buccellato to go forth with notifying the proper authorities. There should be transparency in government.


Borough Freezes Budget - There will be no more spending in Matawan. The Budget has been frozen as was revealed at the Council meeting. I guess the party is over! Hap-hazard spending for Matawan Police covering the Matawan Alliance events at no cost to the Alliance, but to the taxpayers is over, Municipal employees working on these events, paid for taxpayers is over. I admire what the Matawan Alliance is trying to do. However, not with the taxpayers money. Giving money to the Matawan Alliance to help defray their insurance costs prior to the Budget being adopted is over! Well folks, if Matawan should have some kind of emergency requiring emergency services where will the money come from. Good guess is our pockets. Afterall, the 2007 Budget shows an increase of $1.4 million dollars over the 2005, 2006 Budget.

DEP News - Savings to Matawan- Councilman Paul Buccellato reported he received an email, release date October 1, 2007. Speaking to Councilman Mike Cannon and the Council he advised the NJ DEP is refinancing the Matawan Bond for Major Sewer System Rehab, thus saving the Borough $43,462.95. Councilwoman Meghan Mullaney appeared not to know about this fact and did not mention it as a Report. No surprise here. A simple guess is that her head was in the same place it was when the present Administration was spending, spending, spending. In the opinion of MA, Councilwoman Mullaney should not be Chairperson to the Finance, Education & Personnel Committee. It is becoming very apparent that her interests lie elsewhere.

Court Renovation - Councilman Mike Cannon proclaimed he cannot go along with the estimate of $221,000. to renovate the Court. This amount far exceeded the original estimate. It is my opinion, whoever did the estimate should find another job. In a sincere statement Councilman Cannon explained that he is asking that other options be explored i.e., utilizing nearby towns Courts for the time being. It was so moved by the Council. Councilman Cannon was on his toes here and at least is thinking. With the Budget frozen, there is no money for this renovation. It must be done as mandated by the State, just not now. Councilman Cannon made it clear that he keeps a close eye on the finances of the Borough. Even though he is not the Chairperson of that committee, he continually touches base with the CFO. Once again, where was Councilwoman Mullaney??????

Note - Not to take away from Councilman Cannon, but Councilman Buccellato mentioned at a previous meeting, when Cannon was not present, that this project's estimate requires more work. Buccellato mentioned items that should have been included, that weren't, and the cost was way over the estimate. Just in case you thought we fell asleep at previous meetings.
Posted by matawan advocate at 1:15 PM 1 comment: